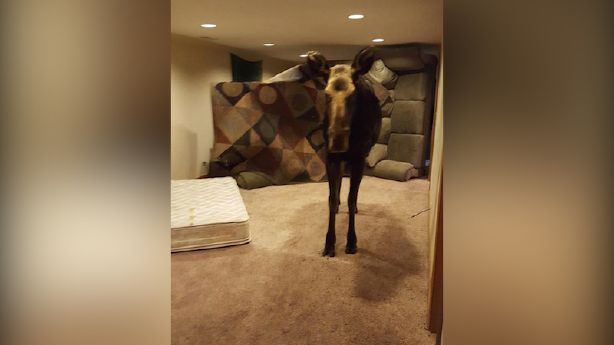 Could you imagine coming home on a Sunday morning and finding a Moose in your basement just staring at you? That exact thing happened in Hailey, ID. According to Lt. Steve England of the Hailey Police Department, the female animal had fallen into a 3-foot deep window well and made her way into the home. “The window opened like a door and the latch was loose,” England told EastIdahoNews.com. “The moose pushed her way through and, amazingly enough, the window didn’t even break.” It was said that a family member called the Hailey Police Department and officers, along with Blaine County Sheriff deputies and Idaho Fish and Game officers. “They put some furniture and mattresses around the room to kind of keep the moose enclosed in one area of the basement,” England said. “Fortunately she wasn’t hurt and remained pretty calm.” By the time Fish and Game officers arrived, the moose had been in the basement nearly two hours. The animal was tranquilized and then all of the officers helped carry it up the stairs and out the front door. “Fish and Game then woke her up and it went on its way,” England said. “We’ve had a lot of wildlife this winter, because of the heavy snowfall,” England said. The moose caused minimal damage to the home, but created a lifetime of memories. “The family will be telling this story for years,” England said. England did not release the address of the home, but said it’s in the Della View subdivision near the Big Wood River.